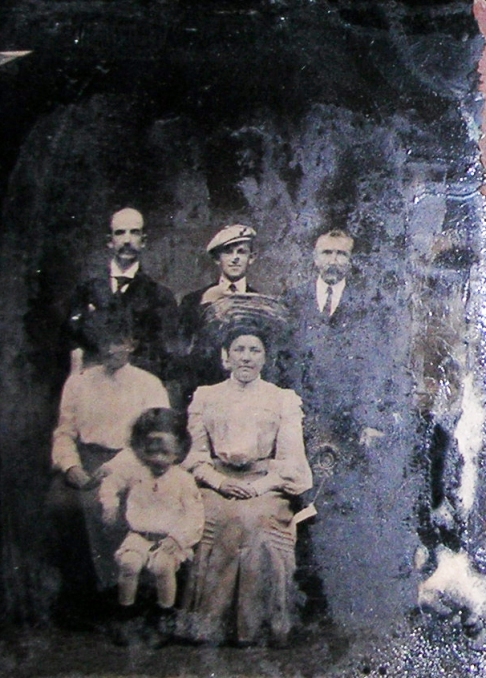 I am continuing my 52 Ancestors challenge with my great-grandfather, Patrick J. Cone, and how he may have helped me by granting me one of my genealogy wishes.

A few years ago, I had read an article with stories of people who had felt their ancestors had helped them from beyond the grave. Although some of the stories seemed a little to far fetched (people who said their ancestor’s ghost appeared to them), I couldn’t help but wish I could get some ancestral help, especially with my Cone ancestors.

My Dad and his sister had always asked if I could find out more about their mother’s family. Their grandfather, Patrick J. Cone, had passed away from a brain tumor before their parents had married. So they knew nothing about his family, except for some of their immediate aunts, uncles and cousins. My Dad and his sister had not been in contact with any of them since my grandmother, Emma Cone, passed away in 1978. And neither one of them had any photos from that side, something that I had really wished for. My Dad had remembered being told that his grandfather was from England.

So, I dug in and found out quite a bit about Patrick Cone. He was born in Ireland, probably around March 31, 1852. From researching his children’s baptismal records, he was possibly born in County Mayo, Ireland. He was the youngest child of Patrick Cone and Catherine Walsh. Some time after Patrick was born and 1861, the Cone family immigrated to Yorkshire, England. (This is why my dad thought he was from England.) The elder Patrick and some of the children found employment in a nearby carpet mill. The family lived there for many years, until their parents both died weeks apart in the spring of 1875. Patrick and Catherine are buried in the Stony Royd Cemetery in Halifax, England.

Patrick came to America at some point between 1871 and 1878. I have never been able to find him in any ship passenger lists. he found his way to Yonkers, New York and worked at another carpet mill in that area. He met my great grandmother, Margaret Carney, and they married on April 12, 1879 at St. Joseph’s Church in Yonkers. They had two children while living in Yonkers. Then, they moved to Philadelphia, PA between 1880 and 1884. Eight more children were born to Patrick and Maggie, three of them dying at a very young age.

Patrick died in Philadelphia on September 15, 1912. His death certificate stated that he was employed as a carpet printer at the J.J. Dobson Carpet Mill. He was buried at Westminster Cemetery in nearby Bala Cynwd, PA. And that pretty much summed up what I had found out about Patrick Cone.

About a week after I had read that article, I received an email from a woman with the last name of Cone. I had entered Patrick Cone’s burial information on findagrave.com. She had been browsing the Internet one day and came across it. She told me that Patrick Cone was her husband’s grandfather, and that his parents, Albert and Marie Cone were buried in the same plot. She had seen the “flowers” I had posted for my great grandfather, and was curious as to how I was related. It turns out that her husband was one of my Dad’s first cousins that he had not been in contact with for decades. Many excited emails were exchanged between myself and this newfound cousin. I sent her photos of our family, and then she asked if I would like to have some old photos of my grandmother! Not only did she send me some incredible photos of my grandmother as a young woman (I was completely surprised to see my grandmother with dark hair!), but she had photos of her wedding to my grandfather! Plus, she had photos of my great grandmother, Maggie, as well as the one I had posted on top, of Patrick and Maggie with some of their children.

I may never know if Patrick, or Maggie, or perhaps my grandmother heard my wishes that one day. But, there is no doubt being contacted by a cousin, and receiving such precious photos were definitely a gift from heaven. 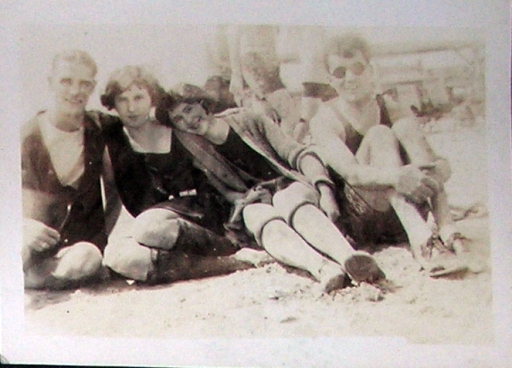 Of all the photos my cousin shared with me, this one is my absolute favorite. My grandmother, Emma Cone, at the Jersey Shore. She is 3rd from the left. 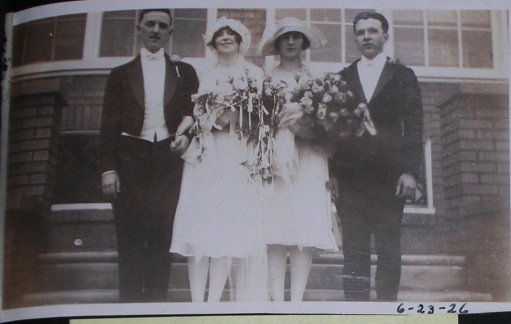 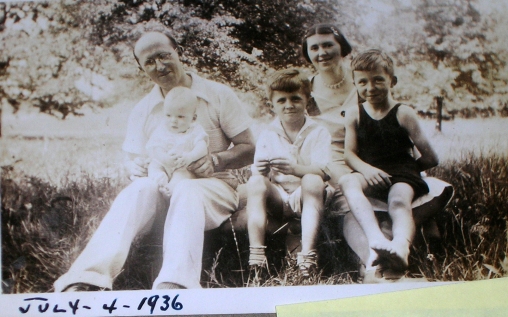 My grandmother and her brother, Albert, visiting relatives in Wyalusing, PA. The infant is the cousin who emailed me. The little troublemaker in the middle is my Dad!