I am an art director/graphic designer. Besides art, my favorite classes in school were in English, literature and History. But I never had any love for Mathematics. I was convinced that if I had a career in art, that I would never need to use anything that I was learning in my Algebra class. So now when I find myself having to design a three-dimensional display for stores I am completely miserable and I whine about having to use Math until the project is done.

This week, 52 Ancestors challenge was to write about someone “different“. I have been thrilled to find so many artists of some shape and form in my family tree. However, this 2nd cousin 3 times removed, stuck out as being completely different from me, not because she was a nun, but she was also a highly respected mathematician. Her name was Sister Mary Bertrand Walton.

A side note: I was first “introduced” to Sister Mary Bertrand by another researcher/distant cousin about 2 years ago. He actually had letters from her that talked about various relatives and he was trying to find out who the people were that she had mentioned. We connected because my great grandmother and her sister, were among some of the people he was seeking. He had already known much about Sister Bertrand and shared this information with me.

Sister Bertrand could be found as a teacher in the 1910 census at St. Cecelia’s Academy, Scranton. In 1915, Marywood College in Scranton was founded and Sister Bertrand joined the faculty as a Professor of Mathematics. She was listed as a member of the American Mathematical Society in 1928.

There is also a story that Sister Bertrand was consulted time to time, by the members of the Manhattan Project, a secret group formed during World War II to build the atomic bomb. It was also said that if Sister Bertrand was a man, that she probably would have been a member of the group. However, I do not have any documentation that supports this. I do not know if I ever would find that out, since the project and the group members have been shrouded in secrecy for years.

Sister Bertrand died on November 11, 1950. She is buried in the Cathedral Cemetery, Scranton with many of her other family members.

I thought I was going to struggle with this week’s 52 Ancestors theme: Same. “What ancestor is a lot like you? What ancestor do you have a lot in common? Same name? Same home town?” I’ve written quite a bit about my family, so I looked to my husband’s family tree for inspiration. I was still stumped. However, while out with friends on Saturday night, inspiration hit me.

My husband was born and raised in Wisconsin, a 3rd generation descendant of a few branches of his family tree. Three of his 3rd great grandfathers and some great grand uncles had enlisted in the Union Army during the American Civil War, including Samuel Kelsey, David Harrison Caylor and James P. Larry.

About three-quarters of Wisconsin’s recruits were sent to Madison, WI to train at Camp Randall. The recruits didn’t spend much time there. They were given a uniform, trained quickly and then sent off to battle. Before they left Madison, the troops would often stop off a at a tavern on their way out of town, located at what is now East Washington Avenue and Milwaukee Streets. The area became known as “Union Corners.”Soldiers would belly up to the beautifully carved wooden bar on the first floor of the two story building, and order their drinks that from an assortment of bottles displayed on the back bar, which was also intricately carved.

Almost 100 years came and went. The Civil War was long over. In the 1950s, the old tavern building was torn down, and replaced by a gas station. Another, smaller, one story building was built and the handsome wooden bar and back bar were moved to the new building, and the tavern business continued, changing owners and names.

It is still open today, and is one of the most popular spots in Madison for craft beer enthusiasts. Once in a while, you will find my husband among those enthusiasts. Perhaps sitting at the same spot and touching the same wood that one of his 3rd great grandfathers may have sat over a hundred years before, before they marched off for war.

“Luck of the Irish” is this week’s theme for the 52 Ancestors challenge. My dad’s side of the tree has plenty of Irish branches and ancestors to pick from. I decided to focus on my great grand uncle, Amandus Logue.

Amandus was the son of Manus and Ann (Brown) Logue. He was born in Ireland on September 1, 1859, probably in County Donegal. One day in October 1864, he and his mother boarded the ship Thornton in Liverpool, England and sailed to America to join his father, who had already been living in Allentown, PA for 4 years. They arrived in New York on October 28, 1864.

The family settled in Allentown, where Manus was employed at the nearby furnace. Young Amandus grew into manhood there, and most likely joined his father working at the furnace where he might have learned the boilermaking trade.

Sometime around 1864, Amandus married Delia Fanning. They had at least 7 children born to them, however at 3 of them died when they were very young.  Their surviving children were Alice, Mary Ellen, Lillian and Charles.

In 1900, Amandus and his family were living in Brooklyn, NY. However, they were back in Paterson by 1910. It is possible that the locomotive works was in financial troubles and had closed during that time period, forcing Amandus to seek employment elsewhere.

However, in 1911 Amandus was lucky and did find employment on a little construction project, known as the Panama Canal. He boarded a ship for Panama on January 3, 1911 and arrived on January 11th. He was employed as a boilermaker, first class. He worked there until the end of May and arrived back into the port of New York on June 6, 1911 on the ship “Colon.”

Amandus died on September 14, 1944 at the age of 85. He is buried in the Holy Sepulchre Cemetery in Totawa along side his wife, Delia.

“Stormy Weather” is this week’s theme for the 52 Ancestors challenge, which seems fitting now that warmer weather has finally made a comeback in Wisconsin. It brings to mind of those quick, and often violent, thunderstorms that roll across the midwest during the Spring and Summer months. So this week’s post is a short and sad story of how stormy weather impacted the life of one of my husband’s ancestors.

Elizabeth Mariah Dutton, is the 2nd great grand aunt of my husband. She was born in 1855 in Missouri to William and Elizabeth (Lenox) Dutton. On September 13, 1874 she married a young man by the name of Clay Squire in Texas County, Missouri. Clay and Elizabeth settled to a life off farming on some land near his parents, Henry and Emmaline Squire 6 miles south of Summerville, Missouri. They had 2 sons born on their farm: William in 1876 and Albert in 1878.

One morning in May of 1881, Clay got up and went out into his fields to get the corn planted for the year. The day must have started out beautiful and sunny. However, unknowing to Clay, there was one of those springtime thunderstorms brewing. It must have rolled in quickly, while Clay was out planting his corn, taking him by surprise. He probably was trying to get back to shelter, when a bolt of lightning struck him, killing him instantly.

He is buried in the Oakside Cemetery in Summerville, Missouri, alongside his father Henry.

Elizabeth was left as a young widow with 2 small children at the age of 26. Two years after Clay’s death, she married David Fry in Howell County, Missouri. She and David were married for many years, and had 6 sons together. Elizabeth died on July 10, 1926 in Thayer, Missouri. She is buried in the Thayer Cemetery alongside her second husband, David.

“Close to Home” is this week’s theme for the 52 Ancestors challenge:  Who has a story that hits “close to home”?

My mom had been trying to locate copies of my grandparents’ high school yearbooks for years. Even though we grew up in the same town they had lived in, it was still difficult to find copies of yearbooks from the 1920s. So, when Ancestry.com released their U.S. School yearbook collection, I hoped that they would have yearbooks from their alma mater (and mine), Lehighton Area High School.

I was hoping to find the yearbook of my grandmother, Florence Anna Hettig. She was born August 25, 1909 in Lehighton, PA to Stephen and Ida Mae (Hahn) Hettig. I didn’t get to see my grandmother very much when I was growing up. She was living in Boulder, Colorado and then later lived in Warrenton, Virginia with my aunt. I would see her when she traveled back to Lehighton to visit with family. But, she always remembered our birthdays and send gifts for Christmas. She had always loved to draw and paint, and I specifically remembered her gift of a Jon Gnagy “Learn to Draw” Art Set. I loved to draw and paint myself, and I remembering spending hours drawing with those pencils and pastels and producing many little drawings, that my Mom stills has buried away somewhere.

I was pleased to find that the 1927 edition of the Gatchin Bambil, was included in Ancestry’s collection. My grandmother was a junior at Lehighton High School during that time. And on page 13, I found her. What astonished me was that she was on the yearbook staff as an artist! I had never known that fact, and it immediately made me feel even closer to her, because I too had been on the Gatchin Bambil yearbook staff when I attended Lehighton High School.

My grandmother passed away on November 8, 1977 in Warrenton, Virginia. She is buried in the Gnaden Huetten Cemetery in Lehighton alongside her parents.

The Yearbook staff of the 1927 Gatchin Bambil, Lehighton High School, Lehighton, PA. My grandmother, Florence Hettig, was an artist for the yearbook.

This is a picture of me (on the right) when I was Associate Editor for the 1980 Gatchin Bambil yearbook. 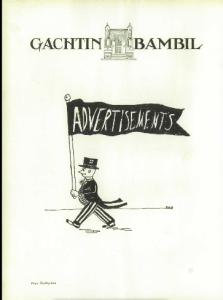