The upcoming election certainly seems to have stirred up lots of drama. Every day there seems to be reports of corruption, scandals and cover-ups. But, drama during an election is no new thing and has been going on for decades. This is something I found out while researching my family tree.

Warrior Run, Pennsylvania is a small town that was begun during the heyday of the Pennsylvania coal mining days. Most of the residents were either employed by the mining companies or the railroads that transported the coal.

It wasn’t surprising that my second great uncle, Stewart Hettig, became a railroad foreman for the Lehigh Valley Railroad. He was born December 5, 1873 in White Haven, PA to Augustus and Sarah (Keiper) Hettig. He and all four of his brothers (Reuben, Stephen, Charles, and Wilson) got jobs working for the railroad. Stewart moved to Warrior Run in May 1906, with his wife, Electa (nee Dennis) and their only child, Stewart Brazil.
Stewart became a prominent 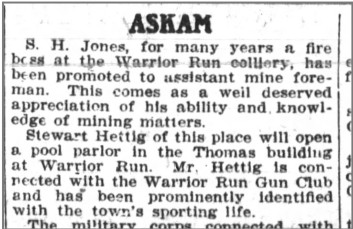 figure in Warrior Run. Besides working for the railroad, Stewart, an avid hunter and fisherman, also became a game warden. He also opened a pool parlor in town.

On June 4, 1910, a primary election was held to cast ballots for a Pennsylvania state senator and a state representative. Stewart had been appointed to the Warrior Run election board as a judge. Serving with him were Richard Thomas and James Moore, inspectors; and John Stinson and Dr. N.H. Jenkins, clerks. Dr. Jenkins had been called away for a medical emergency, and Edward Williams, principal of the Warrior Run school and a deputy clerk of the election board, sat in his place. 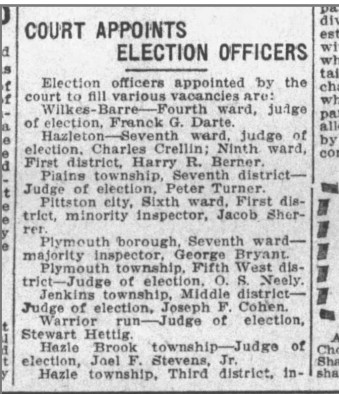 On June 9th, Assistant District Attorney Michael M. McAniff appeared before Luzerne County Commissioners with charges of fraud in nearly all of the ballot boxes in the Fifth Legislative District. It was charged that the returns from Warrior Run were padded. After investigation it was noted that names looked to have been added after the ballots closed. Names were found to be people who later testified, that they did not vote that day, or they were living elsewhere in the country, or they were dead. Votes added after the polls were in a different handwriting than those written down during the day. It was also charged that certain voters were given shots of whiskey in order to buy their vote. The whiskey was rumored to have been purchased by the mining company. The District Attorney’s office investigated and on June 11th, arrest warrants were issued for Stewart, inspectors James Moore and Richard Thomas; and clerks Edward Williams and John Stinson. Also arrested was James O’Boyle, a hotel keeper, who was charged with bringing whiskey to the polling place and providing it to the election board. Witnesses later testified that they were paid by the mining company to vote for Senate Candidate, Edward James. 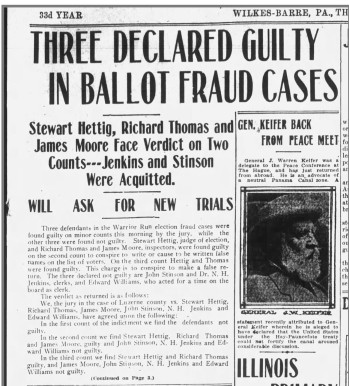 After a trial and an unsuccessful appeal, Stewart, James Moore and Richard Thomas were found guilty and sentenced to 6 months imprisonment at the Eastern State Penitentiary in Philadelphia. 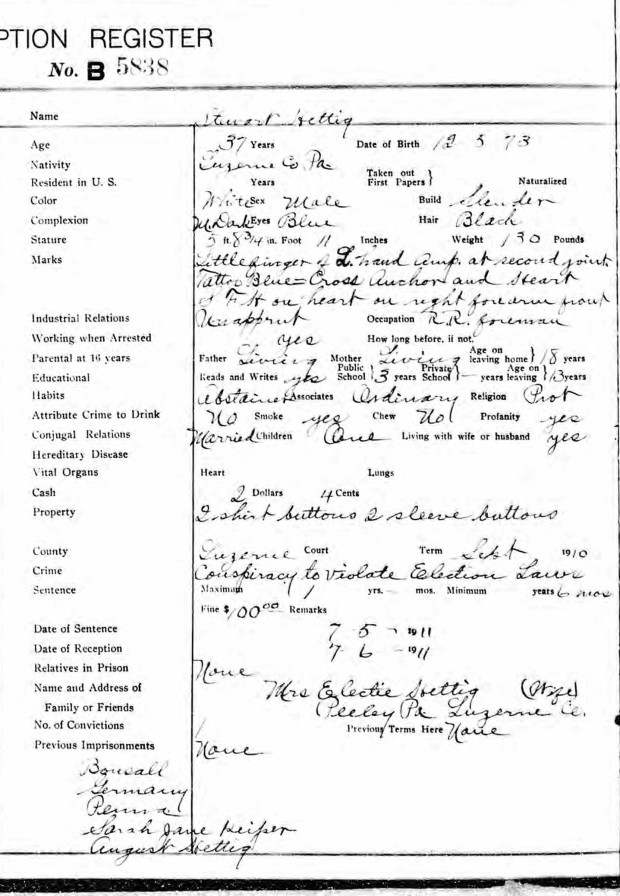 After his release from the penitentiary, Stewart lived a relatively quiet life, until 1930. When he was the lone witness of a deadly train robbery. Four men were killed when bandits blew up a railroad car that held a mining company payroll as it traveled through Warrior Run.